Planning a family trip in the second half of 2022 and want me be clear on my points goal, acknowledging a points devaluation is always possible. Aspiration is 4 return business class fares to Europe in August/Sept. I note it’s very difficult to get Qantas rewards flights but more possible through partner airlines. The partner classic rewards table says 318,000 QFF points per person return to Europe but the Qantas booking page says 356,400 per person. See the below screeshots. 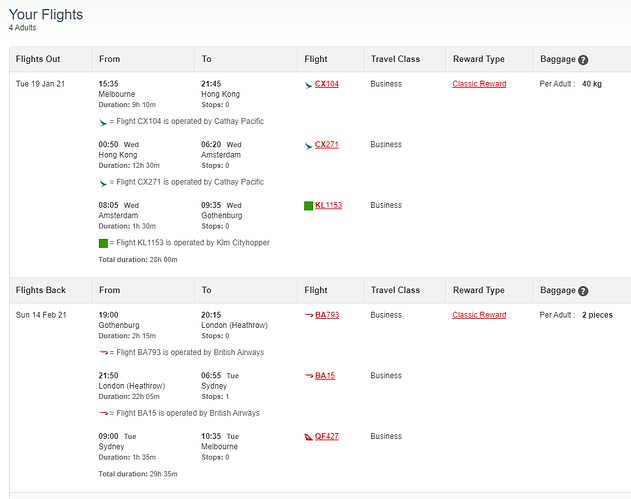 Am I applying the tables incorrectly?

For the flights from Europe, something slightly different is happening. You’ll notice from looking at Qantas Classic Flight Reward tables that Qantas Classic Flight rewards and British Airways Classic Flight rewards are on different tables. As a result, the Qantas Flight and the BA flights can’t be combined on the same reward. So Qantas is charging you 159,000 points for the BA flights from Gothenburg to Sydney via London, and then an extra 18,400 points for the Qantas flight to Melbourne.

This is finicky and complicated – I can understand your confusion! The bottom line: to save yourself 38,400 points per person, I’d use points to fly from Melbourne to Amsterdam and Gothenburg to Sydney on Cathay Pacific and British Airways respectively, then I’d either pay money for the short domestic flights, or use points to book economy reward flights. Business class probably isn’t worth it for such short flights.

@sixtyeight that’s great and now makes sense. I agree those short flights are not worth being business class so cash or economy rewards makes sense.

Is it possible to book different classes in one booking through the Qantas site or easier to book those short flights as separate bookings?

It’s easier to book them as separate bookings; I don’t think it’s possible to book different classes in the one booking through Qantas.

The only FF programme I know of that allows people to book different classes in the one booking is Asia Miles. Even then, you can’t do it yourself through the website: it has to be done via telephone or online chat.